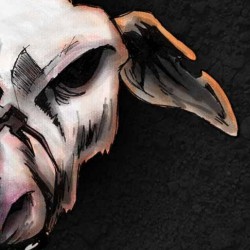 Prince of Nightmares, by John McNee 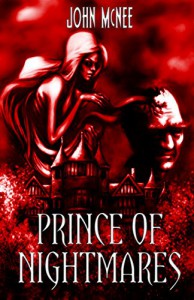 Full disclosure: I do not know the author of this book, but I do greatly admire his collection Grudge Punk, and when he approached me with a review copy of this novel, I couldn't turn it down.

First off, Grudge Punk is one of my favorite books. Did I like Prince of Nightmares as much? Frankly, no. And I'm not quite sure they are comparable entities. One's a collection of intertwining stories set in a shared hard-boiled universe populated with rough characters made of metal, flesh, and plastic bits. The other is a novel which brings to mind the dark and icky kind of '70s psychological horror films in which you'd find a rather worn-down and unsavory Donald Sutherland. That type of film but directed by Ken Russell after he'd peered into the future to view Clive Barker's Hellraiser.

To me, Grudge Punk is a unique and exciting thing, whereas Prince of Nightmares isn't quite as fresh. Sometimes it even seems to be an homage (not in itself a bad thing at all). Don't get me wrong, Prince of Nightmares isn't a bad novel by any stretch. I'm just taking the long way around in saying that, to me, it suffered by comparison to his earlier work that I enjoyed so much. Also, I must admit that crazy shit like Grudge Punk is more my bag anyway. I can easily see differently wired individuals preferring this work over the other.

Some things that didn't bother me but I know will bother some readers:

1. Lack of sympathetic characters. 2. Dreams/nightmares are a huge part of the premise, so you're going to run into the 'is this or is this not a dream?' scenario at some point in the narrative. That's a given. If that bothers you, stay away.

What I would have liked more of:

Honestly, I'd love to read a prequel to this book. The backstory at times was more interesting to me than what was going on in the present.

1. The main character is a man in his eighties. 2. The imagery in this book is visceral and fantastic.

John McNee is an author to watch, and I'll be buying his next book on day one.